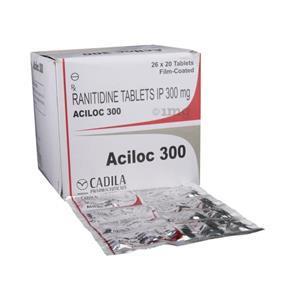 Ranitidine is generally used in treatment of acidity, heartburn and stomach ulcers

Consume this medicine in the dosage and duration as per your doctors advise. While taking Ranitidine, swallow it completely without crushing, breaking or chewing it. Ranitidine is advised to be taken at a fixed time, but may be taken together with food (or) without food.

Ranitidine is an antacid H2 blocker. It lowers the amount of acid in the stomach that helps in relief of heartburn & acid related indigestion and works to make the condition better.

Q. Can I take Ranitidine with azithromycin?
Yes, Intake of Ranitidine along with azithromycin. Ranitidine may be provided to lower the acid secretion caused by azithromycin, gastritis or stomach irritation.when they have used together No drug-drug interactions or any additional harmful effects have been seen reported compared to a drug used alone.

Q. Can the use of Ranitidine cause constipation?
Yes, Constipation has been reported as a common side effect of Ranitidine. Using a high fiber diet and plenty of fluids can benefit from relieving constipation and can also help in reducing acidity.

Q. Can I take Ranitidine with prednisone?
Yes, Ranitidine can be taken with prednisone. No drug-drug interactions or any change in side effect profile have been when these are used together compared to when each drug is used alone.

Q. Can I take Ranitidine with metoprolol?
Yes, Ranitidine can be used with metoprolol. No change in side effect or drug-drug interactions has been observed when these are used together compared to when each medicine is commonly used alone

Q. Is Ranitidine an antacid?
Ranitidine is not an antacid. it comes under the group of H2 blockers (antihistamines) which reduce the amount of acid produced in the stomach while antacids alone neutralize the stomach acid by coating the stomach.

Q. Can I take Ranitidine with tramadol?
Ranitidine can be taken along with the tramadol. No change in side effect or drug-drug interactions has been reported compared to when they are taken alone and it may be provided to lower the acid secretion caused by tramadol, gastritis or stomach irritation.

Q. Is Ranitidine safe?
Yes, Ranitidine is safe to use if taken at prescribed dose and duration as prescribed by your doctor. But there are some common side effects that you can undergo at the doses recommended like abdominal pain, flatulence, constipation, diarrhea, nausea.

Q. Does Ranitidine interfere with H. pylori test results?
Ranitidine using as it interferes with the urea breath test that a significant number of patients infected with Helicobacter pylori can have negative test results.which is done to know H. Pylori infection.

Q. Can I take Ranitidine with Rabeprazole?
Yes, Rabeprazole is commonly used to prevent induced stomach ulcers and gastritis by reducing the production of acid in the stomach.there are no clinically significant harmful effects or drug-drug interactions seen when Ranitidine and Rabeprazole can be taken together.

Q. Can I take Ranitidine with steroids?
Yes,Ranitidine can be used with steroids. No change in side effect or drug-drug interactions has been reported compared to when they are used a

Q. Can I take Ranitidine with famotidine?
Ranitidine can be taken with famotidine. Both can lower gastric acid secretion by blocking the H2 receptor in the stomach. So It is not recommended to use them together as they have a related action and when taken together, there could be an increased risk of side effects.

Q. Can Ranitidine be used to treat gastritis?
Yes, Ranitidine helps by reducing the amount of acid released into the stomach and acid reflux, relieving stomach pain Hence it can be used for the short-term treatment of gastritis.

Q. Why Ranitidine is given along with vitamin B12?
Ranitidine can cause vitamin B12 deficiency as it reduces the acid secretion in the stomach which is needed for the absorption of Vitamin B12. To prevent this deficiency, vitamin B12 may be recommended by your doctor along with this drug

Q. Can I take Ranitidine with vitamin C?
Yes, Ranitidinecan taken along with vitamin C.No change in side effect or drug-drug interactions has been observed when they are used together compared to either medicine alone.

Q. Can Ranitidine be used with vitamin D?
Yes, Ranitidine can be taken with vitamin D. it reduces the absorption of calcium and causes calcium deficiency leading to osteoporosis and raising the risk of bone fractures like wrist, hip, and spine fractures. Hence It is commonly recommended to be used as a supplement as the long-term use of Ranitidine.

Q. Can the use of Ranitidine cause gastroparesis (partial paralysis of the stomach)?
No, the use of Ranitidine is not known to cause gastroparesis (partial paralysis of the stomach), however in case you experience signs and symptoms of gastroparesis like persistentÂ nausea, vomitingÂ (especially of undigested food) and abdominal painÂ or a feeling of fullnessÂ after eating even small amount of food, consult your doctor as it may be due to some condition that needs attention.

Q. Can the use of Ranitidine make you feel high?
No, Ranitidine doesn't make you feel high. But it may cause irritability, depression, mental confusion, though very rarely. These undesirable side effects occur normally in aged or kidney disease or severely ill patients.

Q. Can I use Ranitidine for treating warts?
No, some research has shown that Ranitidine can increase the effect of drugs used for the treatment of this condition. Warts are a viral condition in which the patient has rough, small and hard growths similarly raised bumps on the skin. Consult your doctor for the proper treatment of warts and avoid self-medication. If not treated properly as it may bleed or spread to other body parts or infected. Hence Ranitidine is not taken for treating warts as it is not recommended for this disease condition.

Q. Can the use of Ranitidine cause headache?
Headache is the common side effects of Ranitidine. Please consult your doctor if you feel headache for a prolonged duration while using Ranitidine.

Q. Why does Ranitidine cause pneumonia?
Ranitidine means of its acid-suppressing ability may allow increase bacteria in the gut which can move to the respiratory tract (lungs) following breathing. Patients taking Ranitidine are two times more prone to develop pneumonia than the normal patients. Hence ask your doctor if you have lung disease as your dosage may need to be adjusted.

Q. What foods should be avoided when you are taking Ranitidine?
fried foods,fat-rich foods, prepared in butter or oil, tomato-based foods, and juices, drinks from citrus fruits like lemon water or orange juice, caffeinated drinks like cola, tea, and alcohol-containing drinks should rather avoid foods that cause acidity and heartburn as they would increase your disease condition

Q. Why is Ranitidine given with cancer drugs?
some studies Ranitidine can potentiate white blood cell against cancer cells and can be helpful in the treatment of cancer.Ranitidine may be used for many reasons in cancer patients. It can lower stomach acid volume in patients experiencing chemotherapy to prevent aspiration and reduce the risk of stomach ulceration and bleeding.

Q. What is the benefit of taking Ranitidine with pantoprazole?
Both Ranitidine and pantoprazole lower gastric acid secretion, however, they work by different mechanisms. If you have been advised to take pantoprazole, you can also take Ranitidine initially for rapid relief of heartburn and acid reflux as pantoprazole may take a few days to show its effect and provide relief.

Q. Can I take Ranitidine with pain killers?
Yes, Ranitidine can be used with painkillers. there are no clinically significant interactions however it can help to prevent painkillers caused gastritis and stomach ulcers by reducing the production of acid in the stomach.

Q. Why does Ranitidine cause diarrhea?
Use of Ranitidine lowers the natural stomach acid which normally helps to kill bacteria. So, use of Ranitidine leads to overgrowth of the harmful bacteria like clostridium difficile which can cause diarrhea. This is known as clostridium difficileâ€“associated diarrhea (CDAD). Inform your doctor if you have loose stools many times in a day and for many days with stomach cramps and fever.

Q. Is Ranitidine effective?
Ranitidine would be effective only if used for the proper indication in the dose and for the duration as recommended by the doctor. In case you do not find any change in your disease condition while using this medicine, please discuss with to your doctor. Do not change the dose or stop using the medicine without consulting your doctor.

Q. Can I smoke while taking Ranitidine?
It is better to avoid cigarette smoking when you are using Ranitidine. As researches have shown that the effectiveness of Ranitidine is weaker in smokers compared to non-smokers. Moreover, smoking may add to gastric problems starting with more production of gastric acid.

Q. Can I take Ranitidine with warfarin?
Yes, Ranitidine and warfarin can be taken together. But they should be used with care as there could be a rise in warfarin levels which can raise the risk of bleeding from your gums, skin, nose or gut. Stop using the medicine and Discuss with your doctor if you have any of these symptoms

Q. Can the use of Ranitidine cause iron deficiency?
Yes, Ranitidine can use iron deficiency and a lower in hemoglobin levels as it reduces the acidic environment of the stomach needed for the absorption of iron. But, there are no recommendations on the proper monitoring of iron levels or using iron supplements when the patient is using Ranitidine

Q. Does Ranitidine cause flatulence (gas or bloating)?
Ranitidine can cause a common side effect of Flatulence . Although it would be mild to moderate in nature and it goes away once you stop using Ranitidine.